« Back
português
Michael Biberstein - My friend Mike at work
Fernando Lopes
Mike, my friend, is half Swiss, half American. He is a painter and he has lived for thirty years in Portugal, where he discovered his Island of Loves. So, he is also Portuguese. His atelier is in Alandroal, an enormous former warehouse where we made this film. His nom de guerre is Michael Biberstein. Recognized internationally, his work, in Portugal, is represented at the Gulbenkian, at Serralves and in the Joe Berardo Collection. Abroad, he is represented in the collection of the Queen Sofia Museum in Madrid, the Beaubourg in Paris and the Withney Museum in New York. This, in addition to the many private Portuguese and foreign collections. We decided to initiate this adventure with a conversation in the house of mutual friends. “Mike, why don’t you make a painting for me to film?” “Why not?” Mike responded. “But I should tell you that if I don’t like the painting there’s no film.” “Should we risk it?” he asked. “This is the true nature of cinema, and now of painting.” We took the risk, and here is the result. Mike let me watch and film his interior journey in the creation of a painting. So we filmed its silence, its mystery and its magic.
festivals
DocLisboa
Panorama
Caminhos do Cinema Português
FIPA - Festival Internacional de Programas Audiovisuais
Temps d'Images
Faial Filmes Fest 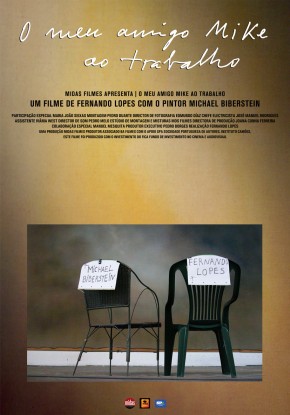